This past weekend was the Toastmasters District 55 Spring Conference in San Antonio at the Airport Hilton. I didn't get a room, but I did sign up for the whole conference.

The Evaluation contest was held Friday night after dinner and the Parade of Banners. I like to meet people at conferences, so I usually ask to join strangers during the meals. I saw a table with an older couple and found 2 seats next to them were being saved, so I sat next to one of those seats. As it turned out, it was a contestant and her dad who was there to cheer her on. Then another contestant and his wife sat next on the other side of me. Across the table was the conference photographer, a judge and another contestant. Out of 10 people, 3 were contestants. Three out of 7 were at my table. I was freaking out because I was a judge, and I certainly didn't plan to get to know the people I was to judge. It makes it difficult to be objective. I wanted to leave, but I didn't want to be rude. Then I saw a club mate and told her that if she could find 2 seats, I'd join her. Unfortunately by then, only singles were left and very few of them. So, I stayed put. The Evaluation contest consists of a test speech, and the competitors evaluate the speaker and offer suggestions for improvement. The speaker was outstanding, so finding ways to improve were very difficult. Several of the evaluators were outstanding. I thoroughly enjoyed visiting with the dad seated to my right. He and I chatted, and I actually developed quite a crush. I couldn't sleep that night I was so excited about meeting him. But, because I'm new at this, I didn't think to share contact info. I just knew they'd return the next evening for the International Speech Contest, but they didn't.

The Distinguished Toastmaster (DTM) ceremony was after the banquet on Saturday night. I was escorted by my friend Dan Jackson, DTM, whom I've known since we started Slick Talkers in 1992. We bump into each other practically every time I go to a function outside my club. He told me I was beautiful Saturday night and gave me a big hug on stage after putting the medal on me.  Here are some photos of us at the ceremony. 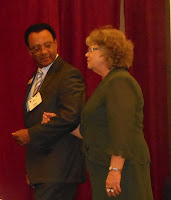 I have such an incredible feeling of accomplishment. Earning DTM is not easy. It takes 42 speeches, plus leadership modules, a year commitment as a district officer, mentoring, training others. It's an awesome experience. Many do it in 3-4 years; I was a little slower. The year commitment stopped me cold. Many stop at the High-Performance Leadership project, which entails deciding on a project, setting up a committee, having meetings, and completing the project. Mine was our 20th Anniversary Fiesta! that we had last June. That was a blast!

View My Other Blog